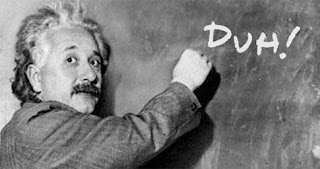 I have been sitting on a tack of sorts the last couple of weeks and it's starting to give me a blister ;)   It actually started with what could've been an interesting article that my husband found online.   The article was discussing a study that showed "Atheists and Liberals have higher IQ's"   Now before assuming that I'm taking a turn towards the political...that's not actually what I'm trying to do in this case.   It's more the study itself that I take issue with, not whether one political affiliation or religious viewpoint is smarter than another.

What irks me is that this thing has become almost viral with so many people accepting it as proof of something that they've wanted to hear for a long time but the study itself has several very serious flaws that seem to be simply ignored for the most part.   For one, the differences between the groups were mariginal at best.  6-11 pts.  And while that is statistically significant, it's hardly a huge gap and therefore could easily be a case specific finding, as in there is a good chance, with the difference being so small, that the same difference may not be found in subsequent studies.   Before declaring this study as "law", we should wait to see what the follow up studies, if there are any, have to say.

Another consideration is that, and this one actually favors the atheists in the study, is that the scientists who performed the study foolishly looked at the iq's of two different age groups.   The first being adolescent atheists and the second being adult believers.   You can't compare the IQ's of adults and teenagers without first taking into account whether or not the adults went to college at the very least.  Some people will claim that IQ is fixed, but the fact of the matter is IQ is far from fixed.   To some degree (about 40%-80%) of our IQ is genetically predetermined but the rest (20%-40%) is determined by our environment and our experiences.  The more we experience, the higher our IQ.   Doing things like going to college or graduate school actually works to increase our IQ's even in some cases simple things like life experience can increase our IQ's.   You cannot, with any degree of scientific accuracy, compare the IQ's of teenagers (whose brains have not even fully developed yet) to that of adults.

And the final, and most grievous in my opinion, error is in regards to the liberal vs. conservative model.   Again, my problem with this isn't so much the idea that the two groups could have different IQ levels, my problem is in the way the test was performed and subsequently labeled.    Here's the issue, the study itself says that it ignored all other political associations except views on charitable giving.   It forgoes any association with abortion views, any association with immigration law views, gun control, gay rights, etc.   Yet, when you attach such politically weighted terms as liberal and conservative, in the public mindset these things are implied.   When people hear the term liberal or conservative they immediately associate an entire political ideology, they don't think of it simply in terms of charitable giving.  So right off the bat you are going to have a skewed interepretation of these results by the general public (something I've already begun to see).
Secondly, the define liberals as having "concern for genetically non-related people and support of private resources that help those people".   The problem here is that, despite the apparent arbitrary labeling of liberal or conservative by the authors of this study, it's actually conservatives who believe in using private resources to help those in need.   Liberals tend to believe in using public resources and public funds.   This is going to skew their results because conservatives and liberals alike are going to read and respond to the idea of using private resources, not simply resources in general, to benefit others and are going to respond accordingly with conservatives being more drawn to using private funds.   You also have to take into account the fact that several other studies have shown that when it comes to charitable contributions conservatives and religious people tend to donate more, by a drastic margin, than atheists and liberals.   Which means that if you are basing your assumption on who cares more about genetically non-related people by how much they give to those who aren't related to them then conservatives and the religious win out.   Which essentially works in direct opposition to their previous claims about atheism.   And this is why trying to get a handle on who is smarter than whom is such a tricky business.  There are alot of variables and contradictions.   Not to mention the fact that the authors of this study where, in my mind, downright irresponsible when using political labels to describe something that was in reality not political at all but merely reflective a person's generosity.   If they had wanted to attach a liberal and conservative label to it, they should've followed that with the term "giver".   Liberal givers scored higher in IQ than conservative givers would follow their actual method much better than the broader, politically weighted terms that were used.

Possibly what irks me the most is the fact that the authors of this study more than likely knew that it wasn't the most responsible thing to do to use political labels for a non-political study.   They more than likely attached the labels the way they did to garner more attention and therefore more money and more claut to themselves and their study.   Scientific study these days is more about playing politics than it is about getting out the facts it seems.  Having spent a good several years of my life in the field of psychology and after reviewing hundreds of studies in my time, I can honestly say that the mistakes made here resemble more what you would expect to see in the results of experiments done by undergraduate students, not that of professionals in the field.


And now, with the joys of the technological age, we also get to experience intellectual and culture libel where even the worst studies spread like wildfire and are soon taken as an absolute.   It just irks me.   For my own personal guess, I don't think you can assign an IQ level to an entire diverse group of people, with the exception of groups that specifically look for individuals with high IQ's like Mensa.    There are simply too many variables involved and all you have to do is research a bit to see the overwhelmingly contradictory outcomes from other studies that have tried to link IQ to ideologies, political classes, races, and belief systems.   Those things tend to encompass groups that are simply too diverse and therefore the collective IQ cannot be accurately measured.

Well, now that I've written that book and gotten it off my chest, I'll be heading off to get dinner started.  Just remember that old axiom "you can't believe everything you read".