It's a Little Hot 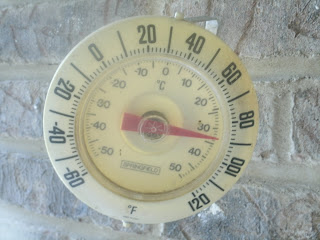 90 degrees today at 2pm in the shade.  By the time the sun had set we had reached a peak temperature of 94 degrees with a heat index of 103 or 104 depending on who you ask.  But it gets better.  Tomorrow is supposed to be one of our hottest days on record, if not THE hottest day on record, with temps crawling at least to 95 and a heat index somewhere between 105 and 115.  Yep, you read that right, 115.  I think hell is about to swallow Ohio whole.

Yes, yes I did.  Now you are probably thinking that I've gone all squirrely in this heat, perhaps I've lost my marbles.  Nope.  You see, there is one treat that I always associate with summer (and you really don't get much more "summer" than 95 degree searing heat).  It isn't ice cream or slushies or snow cones.  It's rock candy.

Rock candy has a looong history dating at least back to 9th century India and Iran possibly even earlier than that!  It's been referenced by many authors and poets, including William Shakespeare.  In earlier times it was used for therapeutic purposes as medicine instead of simply as the sweet treat we know and love today.  For the life of me I have no idea why we ever stopped delivering our medicine via rock candy.  I mean, when I was a kid (probably even now as an adult) if my doctor had said "Here's your medicine" and then handed me a bag full of rock candy suckers, you better believe I would have spent much less time hiding under my bed and in closets to escape my mother and her medicine spoon.

None the less, it wasn't until about the 1700's that Rock Candy began to be widely used primarily as a sweet treat.  Rock candy is still more than a simple lollipop though.  It also makes for a darn tasty science project.  I use rock candy to teach my kids about crystals, solvents, solutes and solutions as well as evaporation.

If you've never made rock candy before then now is the time.  It is relatively easy to do.  First, you need a few common kitchen items. 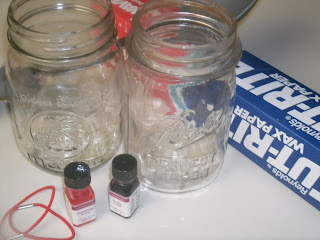 1. A couple of sterilized canning jars.
2. Some wax paper
3. A couple of rubber bands (or in our case hair ties)
4. 4 bamboo skewers with the sharp ends cut smooth.  You wouldn't want a little one to kabob their tongue.
5. A medium saucepan.
6. 1 cup of water
7. 3 cups of sugar (White or brown sugar. Either one works fine.)
8. Flavoring or food coloring if desired.  We used watermelon and grape.

The first step is to heat the water in the saucepan until simmering.  Heated solvents (water) can dissolve larger amounts of salutes (sugar) than they can when cold which makes it possible to super saturate the solution, a necessary step when making rock candy.

Then stir in the three cups of sugar slowly, a couple of tablespoons at a time, stirring constantly and making sure that each batch of sugar dissolves completely before adding more.

Once all the sugar is added you can stop stirring.  Allow the syrup solution to heat to a rolling boil.

Once it reaches a rolling boil, remove it from the heat and dip your skewers in the solution.
Place the skewers on a plate or on some wax paper and allow them to dry while you divide the solution evenly among your two canning jars.  Then add any flavoring or food coloring you want, making the solution just a bit darker than you want the finished product to be.

Place two skewers in each jar then cover with squares of wax paper, poking the paper over the top ends of the skewers.  Place a rubber band around the wax paper to keep it in place and set the jars up on the fridge or in any area that is out of direct sunlight and where the jars are unlikely to be disturbed.  DO NOT TOUCH THEM even though it's tempting.  The humidity in your area will determine how long it takes for the rock candy to form.  The less humidity there is is the faster the water will evaporate and therefore the faster the crystals will form.  You're probably wondering why it is, then, that we can't set these in direct sunlight as that should speed up the evaporation.  Well, that's correct.  It would speed up the evaporation...too much.  If the water evaporates too quickly then the sugar won't have a chance to form into those nice big crystals that become the rock candy. 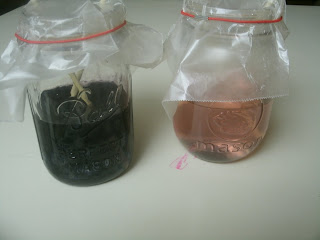 In 3 days to about a week we should have some rock candy suckers to show for our trouble.

Posted by The Craftivist on Monday, July 4, 2011 / Labels: 4th of July, family / Comments: (2)
For independence day this year we spent the morning cheering for Oldest and Middle as they walked in the Fourth of July parade, then we picked raspberries.  I've got burgers and chicken breasts on the grill and a yard full of friends and family.  And tonight we'll be heading to the fireworks display in town.  Doesn't get any better than that.

Hope everyone is having a wonderful 4th of July! 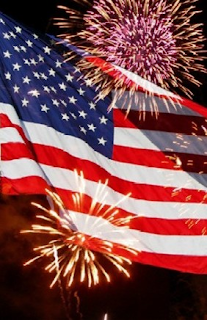