Posted by The Craftivist on Tuesday, July 31, 2012 / Comments: (0)
Oldest has finished her fair projects for this year.  She sewed a dress and has some framed photography she's turned in for Girl Scouts.  I'm pretty proud of the dress she made, she did almost everything by herself (aside from pinning and ironing) and, although there are some mistakes, it looks pretty good.  Considering she's only 8 years old and this is the first time she's ever sewn anything, I think she's done very well.  I just wish I would've gotten a picture of the finished product before we turned it in today but I was in a hurry and didn't think of it.

I've nearly finished The Afghan From Hell which you can read about in a previous post.  I've been working on it off and on for more than three years.  Hard to imagine.  I've finally gotten to the point of adding the fringe.  Once that's finished, it's finished.  Unfortunately the fringe takes FOREVER because the blanket calls for alot of fringe.  And.....I'm starting to run out of gray yarn.  Uggh.   Hopefully I'll find another skein somewhere so I won't have to run out to Hobby Lobby, which is pretty far away from me, to pick up a new one.

In farm news, things have been pretty slow for the most part.  We're looking at hatcheries to order a new batch of chicks and have several different places in mind at the moment.  We've had chickens in the past but it's been awhile.  We're in the process right now of getting the coop fixed and fencing an outside area next too it for them.  We're also considering taking on a friend's Tennessee Walking Horse.  She's having trouble paying to board her so she's asked if we would house the horse in exchange for full use of the horse.  She'd pay for the feed and ferrier/vet bills and offer the kids free riding lessons.  Sounds like a pretty good deal but we're still a little cautious.  None of our barns are really "horse ready" at the moment.   We'll have to see how that plays out.

The few peaches we had are starting to ripen and considering the late frost and then the drought they've turned out really nice.   We have two trees that are chock full of delicious, huge, ripe peaches; one tree that is full of not-quite-ready peaches, and six trees that are completely barren.  Kind of strange how it worked out, it's definitely an all or nothing peach year.  Perhaps the smaller harvest is good this year though because we still have canned and frozen peaches left over from last year.


Fortunately, we've had several inches of rain out here over the course of the last week or two so the impact of the drought is starting to ease a bit.  The rain has been a Godsend.  It's not only perked up most of our garden crops but it's cooled the temperatures down a bit as well.  I've been able to go outside in my shorts and a tank top and not feel like I'm literally baking in the sun.

That's it for us at the moment.  Nothing to exciting and, unfortunately, no pictures this time.  Hopefully I'll have plenty of pictures for the next post.

Posted by The Craftivist on Monday, July 16, 2012 / Comments: (0)
The last few weeks Oldest has been working on her project for the county fair.  She decided to learn to sew and make a dress as one project and do either a photo collage or a family tree for the other project.  With the power outage and the computer being down for awhile, I'm thinking the family tree option might be out of the running this year.


Otherwise, the kids have been busy working on "fun crafts" the last couple of days. 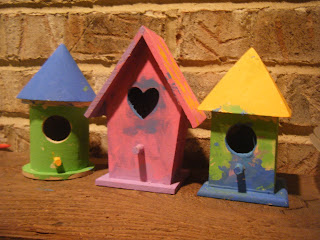 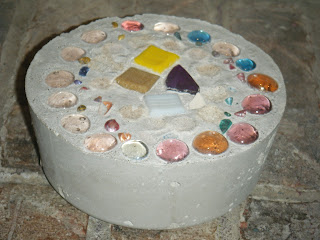 They made the birdhouses this morning .  The houses themselves we were able to pick up at Joann's for about .50 a piece which was a pretty good price for an activity that kept the kids busy for at least an hour.

The garden stepping stone I bought as a kit.  Each kid stuck in a few pieces of tile, stones and shells.  They really had a good time but wow, was it messy!  Good thing we worked on it outside.  I had to hose them off, literally, before letting them come into the house.

At least I was able to keep them occupied another couple of days.  Now I just have to figure out what we are going to do for the rest of this week.   Maybe a few trips to visit Memaw and Papaw are in order...

Posted by The Craftivist / Comments: (0)

We had a really quick and really nasty storm a couple of weeks ago.  The first and last bit of rain we've had around here until today.  Unfortunately the storm knocked out our power, which with our cruddy power company usually translates into several days in the dark.  No different this time, we went 4 days without power.  Signs of an aging infrastructure I suppose.  That's probably going to be the "norm" for most power outages unless it gets even worse.

While we were out of power, DH decided he just had to get his computer up and running for at least one night.  He's much more dependent on computers and television than the rest of us, but we love him anyway.  So, he hooked up his custom built pc to the generator we had to run the freezer, fridge and a fan for a few hours a day.   Despite having two surge protectors between his precious computer and the generator, he still managed to fry the power supply unit.  So, even after the power was restored we were without a computer for another week or so which meant no blogging for me for awhile.  Fortunately things are now back up and running on the technology front.

Unfortunately, we are still in the middle of this really awful drought.  The area's largest river is all but dried up.  The "falls" are no longer falling and are instead reduced to a rather pathetic dripping.  The crops are suffering, of course.  Corn and soybeans are still doing "OK" thanks to drought resistant genetics. But the garden and orchard are in sad shape this year.  We have little in the way of peaches and apples thanks to the lack of rain and a late freeze earlier this spring.  We have nothing in the way of cherries.   Zip, zilch, nada.   Good thing we still have some frozen and canned.  The zuchini, brocolli, cauliflower, and sweet corn have all been experiencing pretty stunted growth even with our sprinklers running all day (at least all day since we've had power...life with a well means no power=no water).   The popcorn isn't even coming up.  It's really not looking good for the pumpkins this year either.  They usually need a lot of rain early in the season to do well.   It did rain some today, a good downpour for about 5 minutes.  Definitely not enough to even come close to getting us back on track.

Our next best chance for rain is supposed to come this Wednesday when the half-blind, all-seeing eye of the weather center predicts we'll be once again getting some nasty storms.  They also predicted we would have rain almost every day last week.  Clearly they are not infallible.  Still, I hope the rain comes on Wednesday and stays around for awhile, I just hope it doesn't bring the wind with it.  Apparently, this is the most widespread drought since 1988 and we're right in the thick of it.   Yuck.  Without things getting any better, and it looks like they probably won't get much better, we can all expect food prices to hike up and up and up. Blech.

But even in trying times like these we must remember to count our blessings and be thankful.  We can be thankful for the fact that this drought hasn't taken a huge toll on human life the way a similar drought could do in villages in Africa or other third world countries.  That fact also gives us all the more reason to consider reaching out in any way we can to help those people in third world countries suffering the effects of natural disasters.   We can be thankful for our good, old fashioned American resolve and resiliency.   We can be thankful for what we do have.  In our case, we have a pantry stocked full of canned peaches, cherries, tomatoes, juices, jellies, jams, pickles, beans, soups, etc. Which means we'll still be able to enjoy the fruits of our labors even without a grand garden this year.  Most importantly, we can be thankful for a loving God who knows and cares about our troubles and even when He doesn't solve all of our immediate problems for us, we can rest assured that He hears our prayers and is still in control.
Newer Posts Older Posts Home