Posted by The Craftivist on Wednesday, March 23, 2011 / Labels: gardening, homesteading, kids / Comments: (1)
Have you ever had one of those days that you swore was out to kill you?  Yesterday was one of those days for me. It started out normal enough, I got up to get breakfast for started and I heard Youngest calling for me.   Went in to check on him and stepped on a toy and fell, face first, into the carpet.
Later, I put Youngest down for his nap, middle and oldest were putting together puzzles with Gran and so I figured it would be a perfect time for me to catch up on a little sleep as well.  I laid down and Middle came in to tell me that Oldest looked at him funny.  Seriously.  Laid back down and Oldest came in to tell me that Middle had made a face at her.  Grrrr.  Laid down again and Cookie came in to root through the bedroom trash.  Got her out of there and the trash picked up and laid down a third time, still hadn't gotten to sleep any yet.  Then came Chandler, to jump up on the bed.  Got him off and out the door and laid down a fourth time and Youngest woke up.  No nap for me.
So I decided to do some laundry.   Carrying a basketful of clothes I happened upon a soccer ball in the doorway to the living room.  I decided to give it one really good kick and send it sailing down the hallway.  That was the plan anyways.  Instead my foot connected with the doorjam.  My toes went totally numb for a few seconds and then....well, the next several words out of my mouth were not Christian or ladylike in any way, shape or form.
I woke up this morning only to find my pinky toe swollen to twice it's normal size and sporting a rather unpleasant purple coloring.  DH decided to take me into the After Hours clinic to have it looked at and sure enough, I broke it.  So, no I'm sitting here typing this with my pinky toe all taped up and a "post op shoe" on my foot. 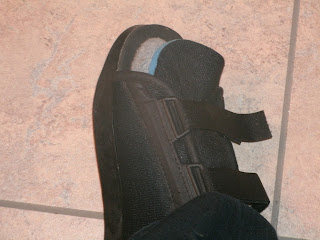 There it is, my handsome reminder of one very bad day.
﻿On a not so painful note, we've got all of our seeds started for this spring's garden!   The kids started their seeds a few weeks ago and about three of them have sprouted...the others met their fate at the paws of an overzealous, crazy dog who decided she could not stand not knowing what was on the table so she decided to knock the table and all of its contents onto the floor.
What they have left is doing really well though (we're going to replant some more seeds for their garden tomorrow or the next day): 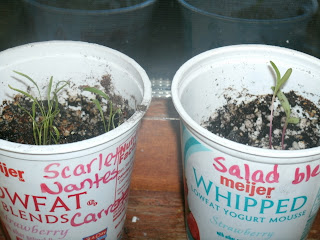 This picture has scarlet nantes carrots (left) and a salad blend mixture (right). 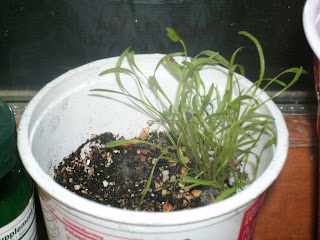 ﻿This is another scarlet nantes carrot.
The kids are so excited to see their seeds growing, it looks like this year's kids garden is going to be as much of a success as last year's. ﻿

Posted by The Craftivist on Wednesday, March 2, 2011 / Labels: kids, Knitting, pattern / Comments: (0)
Oldest's hat is now finished. It's just a basic hat pattern; cast on 84 on size 8 16" circular needles, join in the round, knit a k2 p2 ribbing for 2 inches, then stockinette stitch for 6 more inches, then begin the decreases k10 k2tog across, knit the next round,    the next round k9 k2tog across, knit the next round, next round k8 k2tog.across, knit the next round and so decreasing the number of knit stitches every other round by one until you k2tog all the way across. (At some point, about the k5, k2tog point, you'll have to transfer to size 8 dpns).  Then cut about a 6in tail and thread it through the remaining stitches and pull it tight to finish the hat, weave in the ends, and viola'! You have your hat. 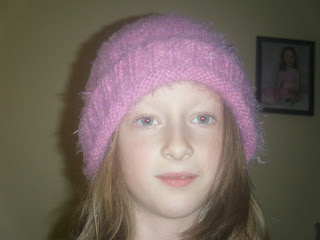 She picked out the fuzzy pink yarn herself.  If you are looking for the same, it's Sensations Angel Hair yarn color #647.

The hat will fit most older children and adults so go on out and make yourself a hat!
Newer Posts Older Posts Home