Posted by The Craftivist on Monday, June 17, 2013 / Comments: (0)
Spring is easily one of the busiest times of the year for us, second only to fall.  In the spring we clean, we till,we fertilize, we plant, we fertilize a little more, we pull weeds, and pull weeds, and pull more weeds, we do a lot of the work on the buildings that we neglected to do over the winter and we wrap up our schooling on top of all that.

This spring was particularly busy.  We ordered approximately 30 young trees to start our new orchard.  We spent a good portion of the beginning of spring planting all the new apple, peach, cherry and apricot trees we acquired, hopefully in about 2 years we will start to see the fruits of our labors.  Very exciting. 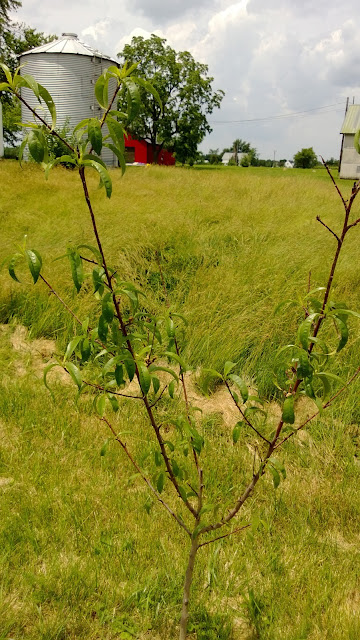 This is one of the larger peach trees we planted.  It already had a few small peach buds on it but those have mostly shriveled away.

The kids have been out foraging as of late, a past time we readily encourage but only after they have been taught what to look for and what to stay far away from by us adults.  They've been bringing in bountiful harvests of wild strawberries and mulberries and hopefully by the middle of next month they will be bringing us blackberries for pies and jam. 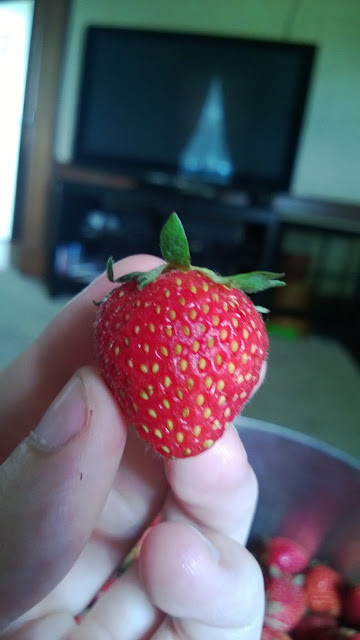 This is not one of the wild strawberries found on our property.  Those, although plentiful, were considerably smaller than this one.  This was, however, one of the excellent berries my mother-in-law picked for us from another local farmer.  Sooo good. 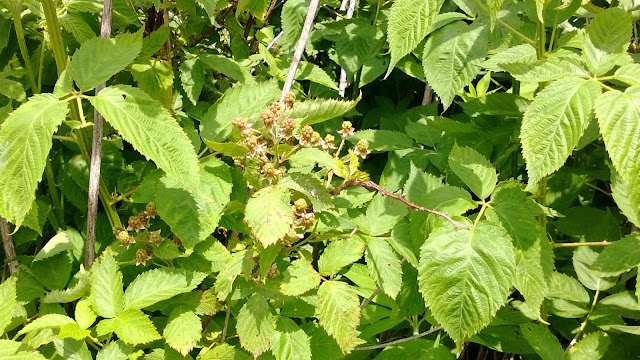 This is one of the many blackberry bushes on our property.   The berries aren't quite ready yet, but they are getting there.

We've been working hard in the garden as well although I don't have any pictures from the garden to share with you at the moment.  The corn is coming along nicely, so are the watermelons, tomatoes, peppers and herbs. This year's garden is much smaller, with far fewer crops than previous year's gardens because I had just given birth when it was time to start planting and, frankly, I just didn't have the energy to do a large garden this year.  Good thing we still have lots of canned and frozen veggies and fruit from last year.

Another sure sign of spring around here....baby chicks.  We ordered 29 (of which we still have 25) baby chicks of various different breeds (all brown or colored egg layers) back in January so much of the last part of the winter was not only spent preparing for our new little human but also for our new baby chickens as well. 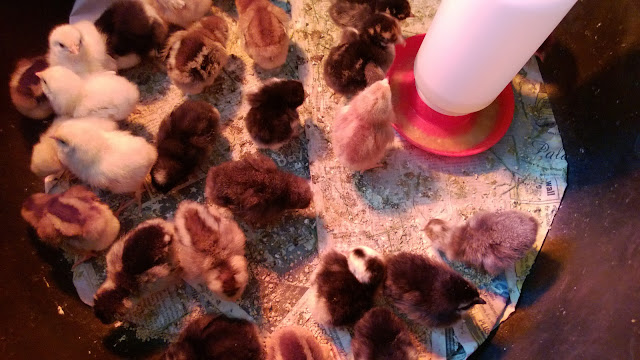 Aren't they cute?  We have a couple easter eggers in there, and some marans, rhode island reds, a delaware, a couple salmon favorelles, some welsummers and langshans among others.

They are much bigger now than they were when this picture was taken and are currently residing in a much bigger "pen", right in the middle of my kitchen no less, until they are big enough to head out to the coop in the barn.   Speaking of, I think I need to refill their water container and give them some more feed.