Posted by The Craftivist on Tuesday, October 23, 2012 / Comments: (0)
I've been away from this blog much longer than I expected.  That seems to happen to me a lot but I come bearing updates.

The first big news: We've moved!   We traded in the old house for a much larger one on much more land.  Moving is a lot of work and it seems to get harder the older I get.  On top of the move, DH has inherited a huge portion of his family's farm and continues to work with his father on said farm, he's hoping someday he'll be able to quit his day job altogether and make his living solely off of farm work.  We'll see how that pans out.

Oldest won first place in the fair on her sewing project.  She was extremely proud.  She did all of the sewing herself.  The only thing I really helped with was cutting and piecing.  Unfortunately, as soon as she brought it home from the fair and tried to wear it, it came apart at several of it's seams.  First projects seem to just work out that way sometimes.  She's done a couple of other projects since then with longer lasting results.

We didn't end up getting the TWH from our friend that I had mentioned in the last post.  The stalls at the new house simply weren't suited or safe for keeping horses.   It was too bad though, Oldest was really looking forward to having a horse around.

I haven't had much time for crafting these days since I've been busy packing, re-packing, and then unpacking.  I'm so tired of seeing boxes at this point that I think I'm going to do all of my future packing in garbage bags.

In garden news, we've had our ups and our downs.  We've had some pretty good tomatoes coming in and our snap beans have been really nice.  The pumpkins were our problem crop this year, there just wasn't enough springtime rain to really get them going.  We did manage to get some pumpkins, about 150 or so, and the ones that did come up are really nice and large so we had enough for the family and for some friends but no pumpkin stand this year.   That's the way it goes, with farming/gardening you have to roll with nature.

We did, however, have lots and lots of  zucchini. I have a zucchini bread recipe to share that makes a fairly basic but very tasty loaf that freezes well.  Just thaw and warm in the oven for a couple of minutes and it's good to go.  I found this recipe in a promotional cookbook for the local newspaper years ago and it's been my go-to recipe ever since.

Preheat the oven to 350 degrees.  Grease and flour two loaf pans.   Mix all ingredients together in a large bowl and pour mixture into pans, about 1/2-3/4 full each.  Bake for 1 hour.  Let stand 5 minutes in pans then remove to a cooling rack or board.  If you are going to freeze, let the loaves cool completely then wrap in each in plastic wrap and place in freezer bags.  If serving immediately, brush the tops of the loaves with melted butter and sprinkle with powdered sugar.  Serve warm. 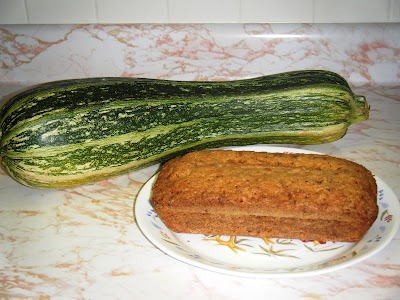 A large zucchini like the one in this picture will make 4-6 of these loaves.