Is It Normal to Not Favor One or Two of Your Children?

Posted by The Craftivist on Saturday, June 25, 2011 / Labels: kids / Comments: (3)
I was reading an article on a blog this morning that was talking about how this woman liked one of her kids more than she liked the other and how she felt guilty for it.  The comments about the article made it seem as though this was the 'norm' but that most people wouldn't openly admit it and saying, of course, that it would be wrong to show to your children that you liked one more than the other.

So now I'm feeling a little awkward.  I really, in all honesty, do not like any one of my children more than I like the others.  I do like different things about each one of my kids.  I like Oldest's generally sweet disposition and even (usually) appreciate the fact that she is a bit of a drama-queen.  I like that Middle is very charismatic and full of personality and I like Youngest's calm and quiet nature.  But I can't honestly say that I like any one of them more than I like the other.   I really do love, and like, all of my children equally.

There are times when they drive me crazy, get on my nerves, frustrate me.  There are times when I really feel overwhelmed and tired and need a break from my children. There are days when I question my decision to home school and wish that they were sitting in a classroom instead of jumping on my couch. There are times when I butt heads with one or more of them.  There are times when we all can't stand each other.  Those times are few and far between though, thankfully.  That's normal family dynamics.  We have our ups, we have our downs but it works that way with all of my kids.   Even if I'm doing my best, most introspective, deep and brutally honest assessment I still can't say that I like one more than the others or that I don't like one as much as the others.

I used to think that's how it worked with parents.  Kids always seem to feel, even into adulthood, that their parents favored their brother or their sister more than they favored them.  But I always assumed that most parents were like me and they really didn't have a favorite.  Now I'm starting to wonder if I'm some sort of freak of nature.  Before I thought I was in the majority, now I'm wondering if I'm a real weirdo.

Posted by The Craftivist on Friday, June 3, 2011 / Labels: crafting, homesteading, kids / Comments: (2)
I finished staining and hanging the first gourd birdhouse of the batch a couple of days ago.  I used an acrylic stain and finished it with about 4 coats to get it to the desired color. 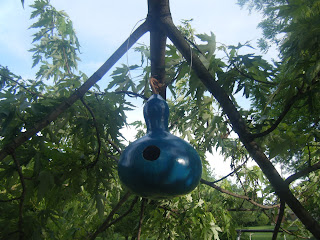 The picture came out a little dark but you get the idea anyways.
Now I just have to finish Oldest's birdhouse that she's entering for the fair.  She decided what birds she wanted to attract and I cleaned, drilled and grinding the opening for her.  But I have to smooth it out a bit.  Then she's planning to paint it with her own design.  We still have a few weeks though, entries don't have to be in until near the end of July.  Hopefully we'll have enough time that if we screw up this one we'll be able to make another one in time to turn it in. :D
﻿
﻿
﻿
﻿
Newer Posts Older Posts Home