Posted by The Craftivist on Thursday, February 13, 2014 / Labels: dogs, family, homesteading / Comments: (0)
Our dog is an important member of our family.  She's our pet.  She's a protector of our family and our home.  She's a playmate for our children.  She's a companion for my husband and myself.  When we have to go out and work in freezing cold temperatures or during the wee hours of the morning or in the blistering heat of the sun, she's right there with us.  She doesn't complain about the cold or the rain or grumble that she's just too tired.  She just wants to be with us.

It's true that the life of a farm dog can be a hard one.  There are hazards and harsh conditions not experienced by those dogs living the high life in Manhattan apartments or neatly manicured suburban homes.  We counter the harshness of farm life by making sure we keep her up-to-date on her shots, get her regular check-ups at the vet even though she hates that, and feeding her  nutritious food.

Years ago, when I was still relying heavily on convenience foods for myself and my family, I saw no problem feeding my dog cheap, store brand dog food.  I figured it was sound nutrition and really didn't worry about it.  It wasn't until I started to research nutrition for my family and started to change our diets that I began to reconsider what my dog was eating.  I started to realize that dog food suffered from many of the same, if not worse, problems that overly-processed, pre-packaged foods meant for human consumption suffered from. It was low on nutritive value, it was full of weird fillers and chemicals and it could lead to problems like obesity, heart disease, allergies, cancer and diabetes.  So we decided to go a more natural route for our dog.  We wanted to feed food that contained natural, healthy ingredients but good quality pre-made dog food is downright expensive.

After talking to her vet we came up with an even better alternative.  We would make her food ourselves.  Let me stop here a minute.  If you are thinking about making your own dog food for your furry friend it's important to talk to their vet first.  They can give you a handle on what your individual pet will need in terms of balance, supplements, amount, etc.  That's what we did for our dog.  We sat down with her vet and came up with a recipe for her that includes chicken or beef, sweet potato or oatmeal, brown rice or oatmeal, and spinach or kale.  I try to prepare two weeks worth of food at one time and I'll switch out the recipe the next time I prepare it to keep her from getting bored with it.  So, for one two week period it will be chicken, sweet potato, brown rice and kale and the next it will be ground beef or liver, oatmeal and spinach.

The preparation is super simple.  I really just put everything except the kale or spinach into a large pot of water, bring it all to a boil together and then let it simmer for an hour or two or however long needed to cook the meat through, then I throw in the greens and simmer a few minutes longer, drain everything and dump it all into a really large bowl. 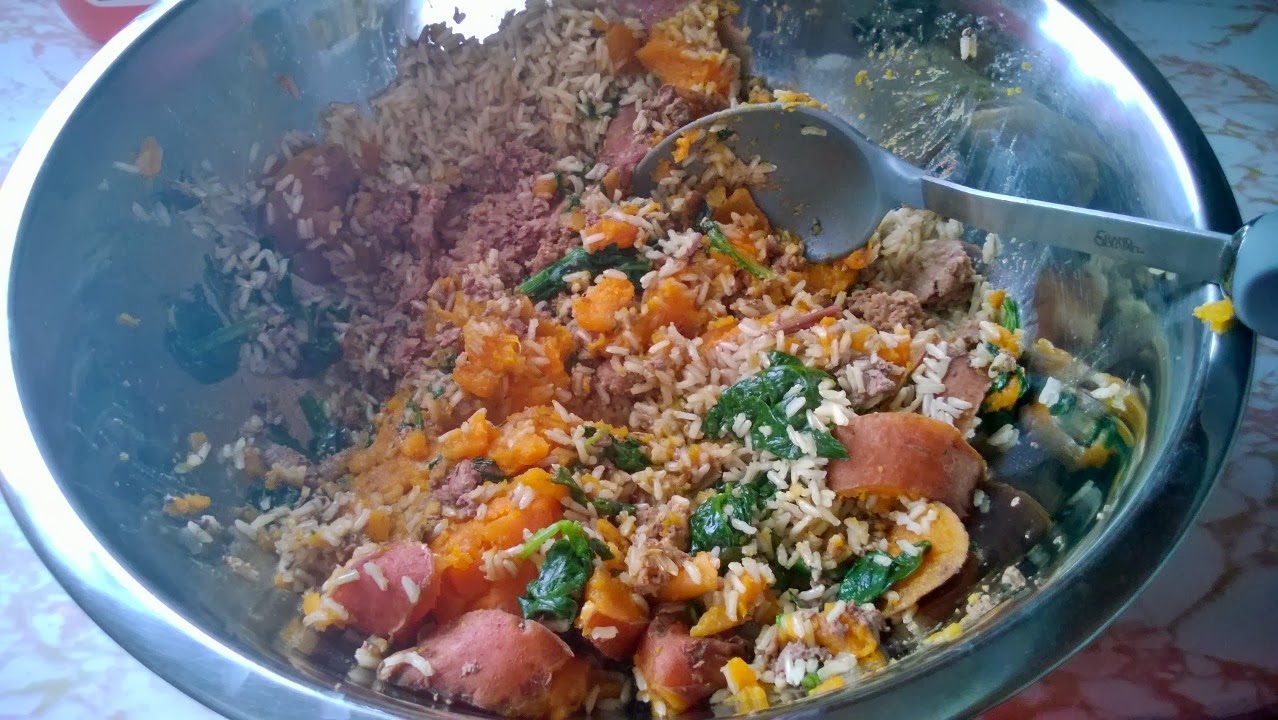 If I've made chicken I will separate the meat from the bones and shred it before adding it into the bowl.  Then I simply mix it all up, mashing the sweet potatoes as I go, until it's all combined.  The end result isn't much to look at, but, as you can clearly see, she thinks it tastes great. 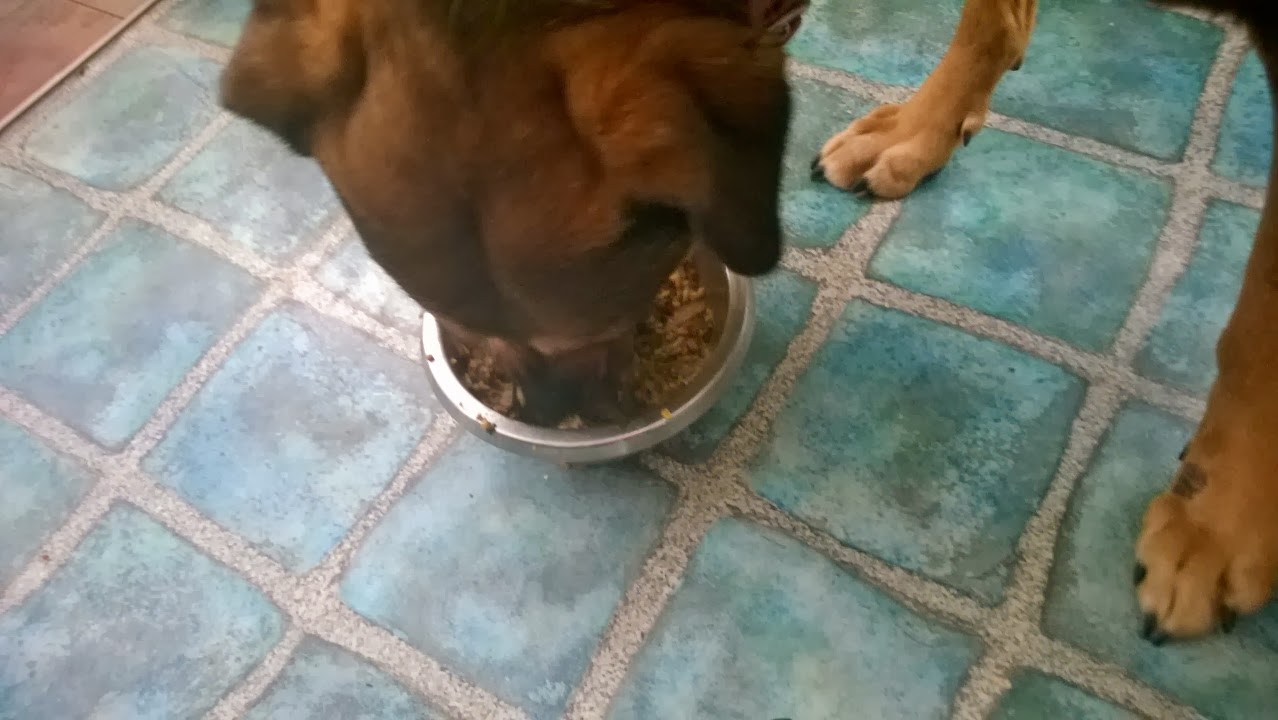 The result of feeding her homemade food has been remarkable.  Her coat is much healthier.  She has more energy.  Her eyes are brighter.  She has less gas (that's something we ALL benefit from) and even her poo is smaller and more solid.  And she no longer has anymore problems with dry itchy skin.

All told making her food ourselves has been no more expensive than buying a bag of the cheap store brand dog food and not much more effort either.   Win/win. 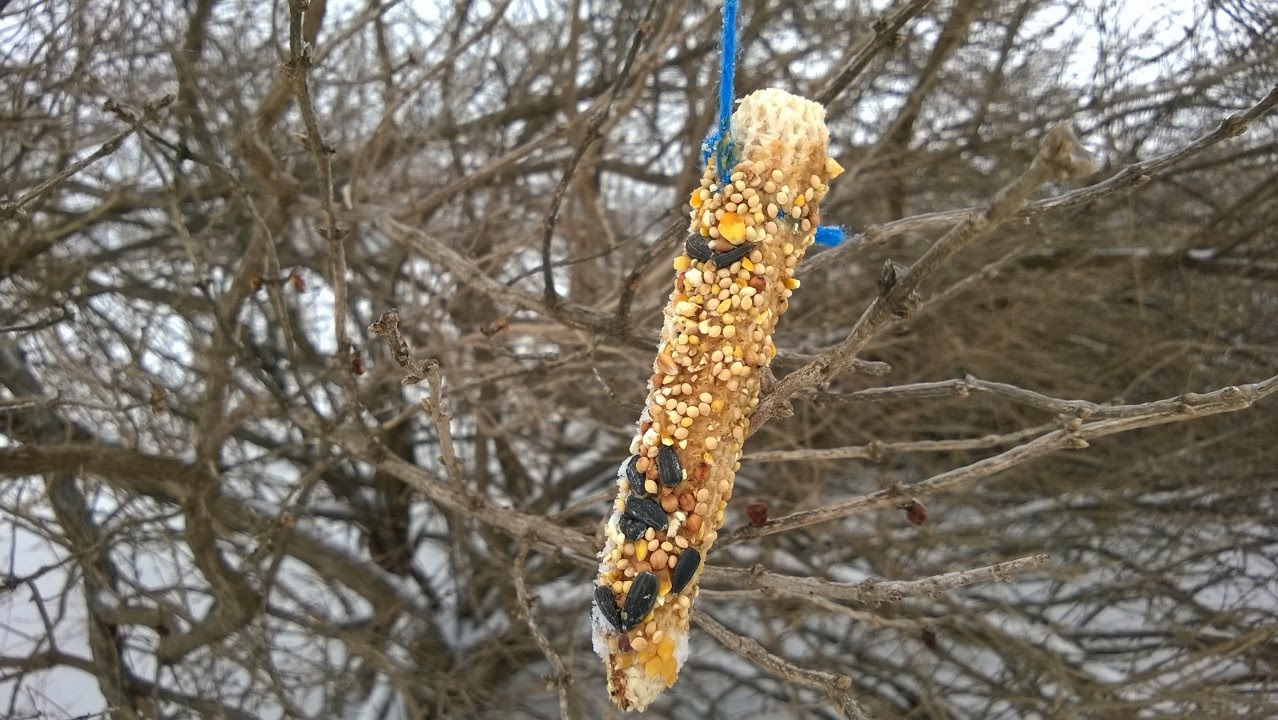 A couple of days ago the kids and I took the popcorn we had been drying in the garage and brought it into the house to be shelled.  Even though we had sold quite a few ears at the pumpkin stand this last fall, we still had more than enough left over to last us through until next fall which means I will be finding plenty of popcorn recipes on Pinterest.  That's ok though because, really, who doesn't love popcorn? 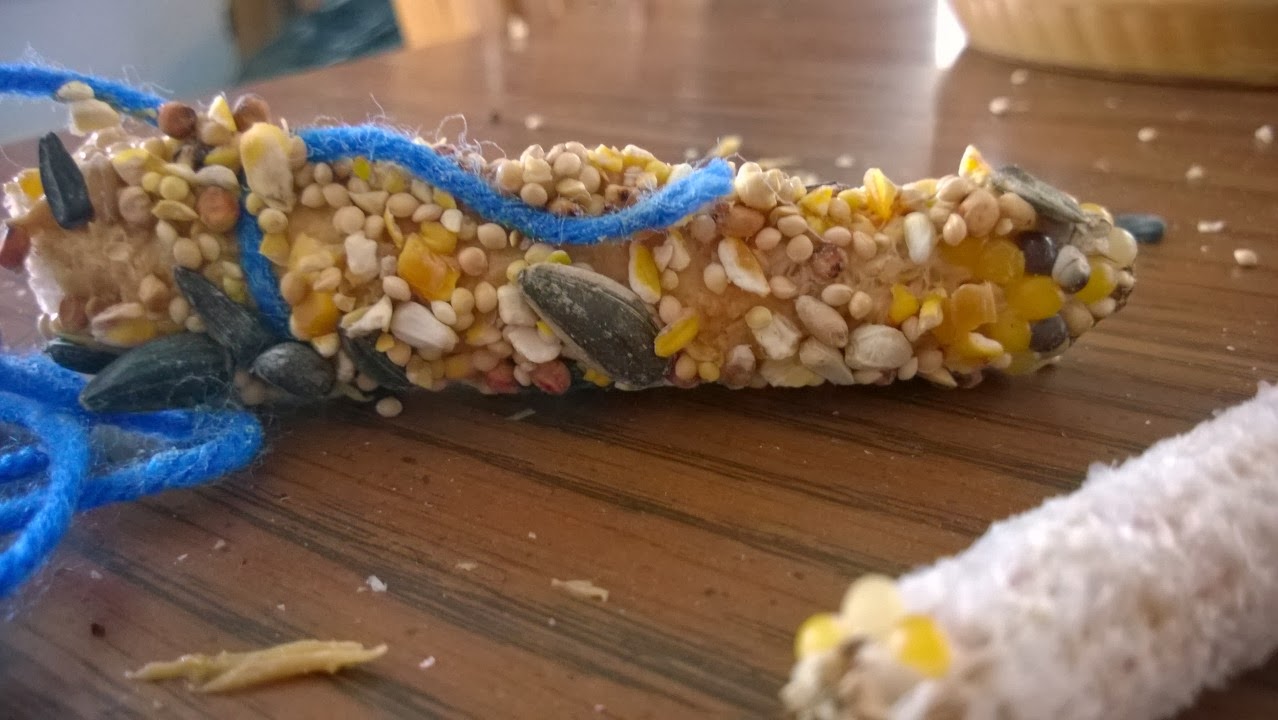 Anyways, after all the popcorn shelling fun was finished we ended up with ten to fourteen little bitty corn cobs.  Normally I would have simply tossed them out into the garden or the thicket and let nature take it's course but this year we decided to do something a little different.   This winter has been hard to say the least.  We've have bitterly cold temperatures, by bitterly cold I mean Antarctica temperatures, and several snowstorms bringing many inches of ice and several feet of snow.  As unpleasant as it has been for us humans living in a cozy home with plenty to eat, I imagine things have been even worse for the little woodland creatures in our area.

So, in the spirit of looking out for our neighbors during difficult times, we decided to make bird feeders out of the left over corn cobs! The process was a simple one and consisted of tying some yarn tightly around one end of the cob, smearing peanut butter (we used peanut butter from an almost empty jar) over them and then rolling them in some store bought bird seed.

Then we hunted around the property for the best trees to hang them from, ones with several branches below the hanging cobs so the birdies could sit and dine in comfort and not too far from the view of the kitchen windows.   After trekking through several feet of iced over snow across several acres of land we finally had them all hung and ready for our fine feathered friends to feast. 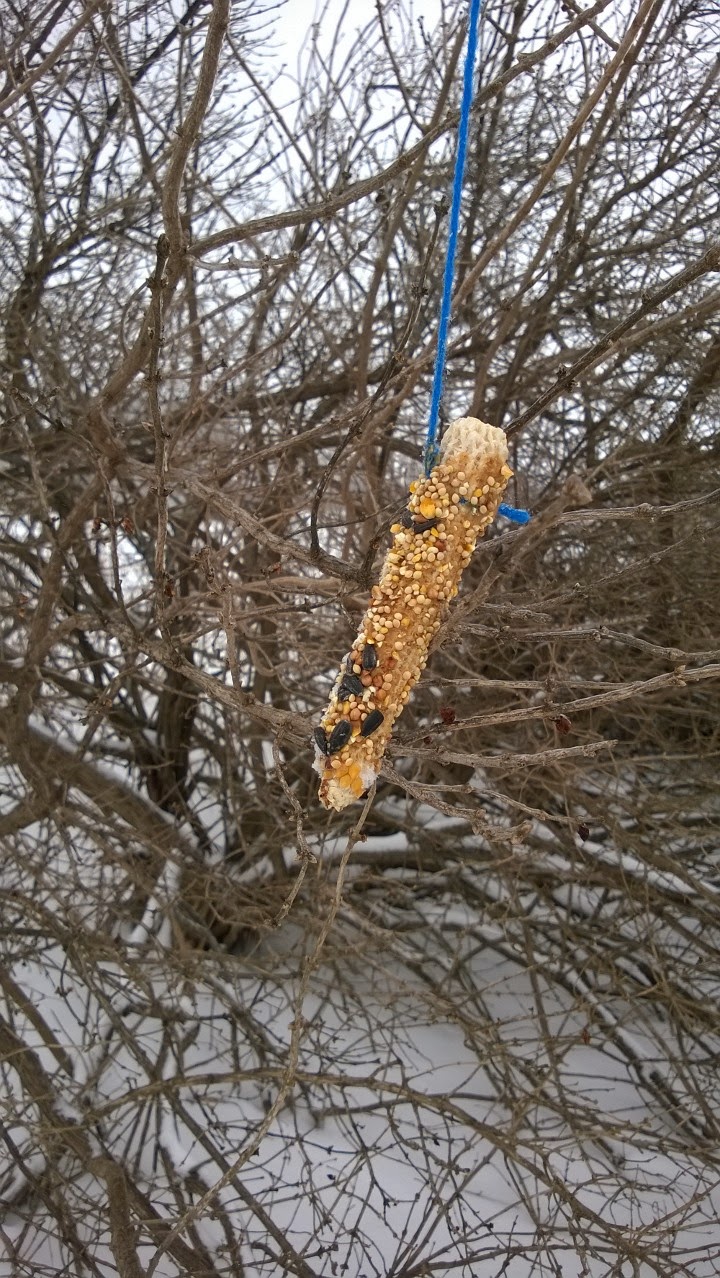 Posted by The Craftivist on Thursday, January 23, 2014 / Labels: food, home making, homesteading, kids / Comments: (0)
The new year has started off with a bang.  With the record breaking cold spells we've been having in the Midwest, most of our time so far this year has been spent trying to prepare for, survive through, and repair after the bitter arctic temperatures we keep experiencing.  You know you're in trouble when it's warmer in Alaska than it is in the lower 48 states.

Cleaning the chicken coop and collecting eggs have become two of my least favorite chores, as the chicken coop is in the large barn clear at the other edge of the property from the house.  Walking out there in -40 degree wind chills has been no picnic.  We prepared the barn well for the first blast from the polar vortex by sealing up as many holes as we could find, shutting both of the large doors and putting up temporary windbreak walls made out of sheets of plywood wherever we felt necessary.  That prep has kept the chickens well and happy but, even with all of that, our eggs have not fared nearly as well.  We average a dozen eggs a day, even during the winter, and the last few weeks we've lost more than half of them to freeze.

Still the ones that we manage to salvage are beautiful, large and extremely nutritious.  We've built quite a large client base around the area for our eggs.  We sell a little more than half of the six to seven dozen we bring in each week, not to shabby if I do say so myself.

The cold weather has taken it's toll on more than just our eggs.  We all have been getting cabin fever.  I've been grouchy, the kids are grouchy, the hubby is grouchy, heck even the dog is grouchy.  So to lift our blues away I decided to make one of our favorite treats, homemade fruit leather!  I went with an old standby of mixed berries, banana, half a lemon (for kick) and a drizzle of honey for added sweetness. 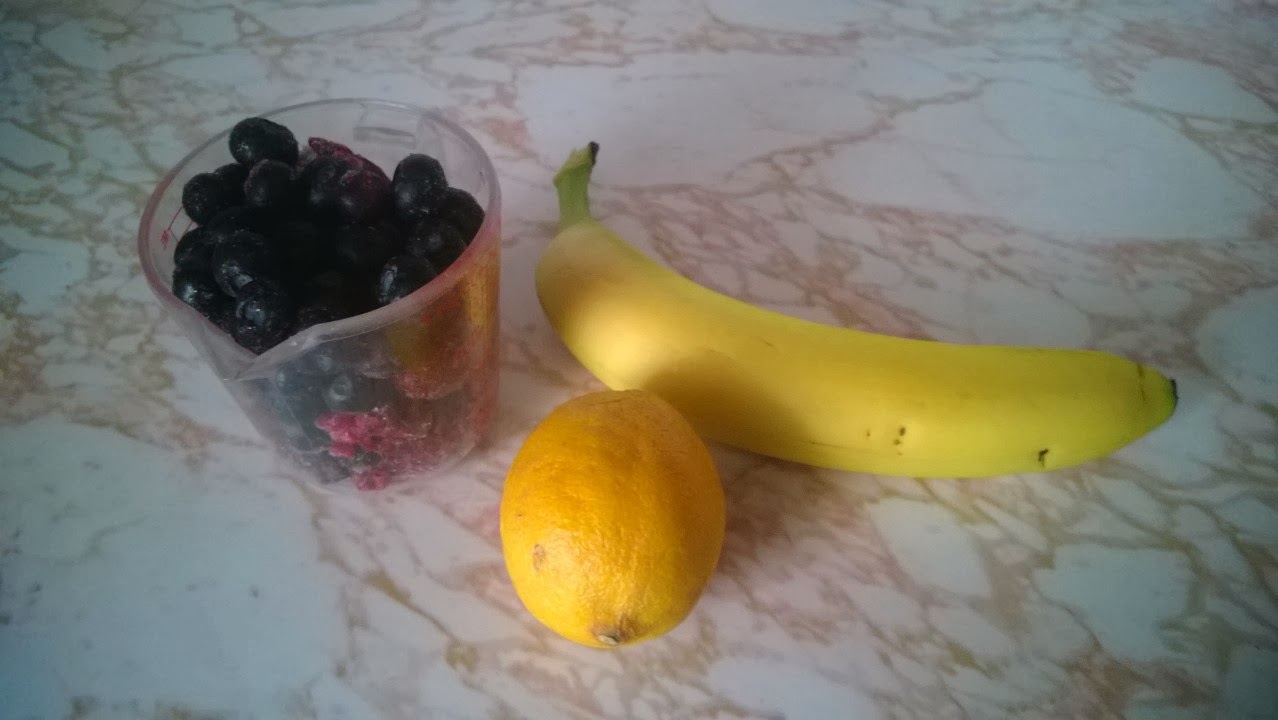 The berries were ones that we had frozen from the spring and summer.  I used a mixture of rasberries, blueberries and wild strawberries.  The banana would have been a bit better if it had been a little more ripe, but, hey, you use what you have, you know?

Anyways, put three cups of any mixture of berries that suits you into a medium sauce pan.  Add one whole banana and the juice from one half a lemon. Turn the heat to medium low and simmer until you get a nice berry, banana, lemon sauce going.  I simmered mine gently for about a half hour until it looked like this: 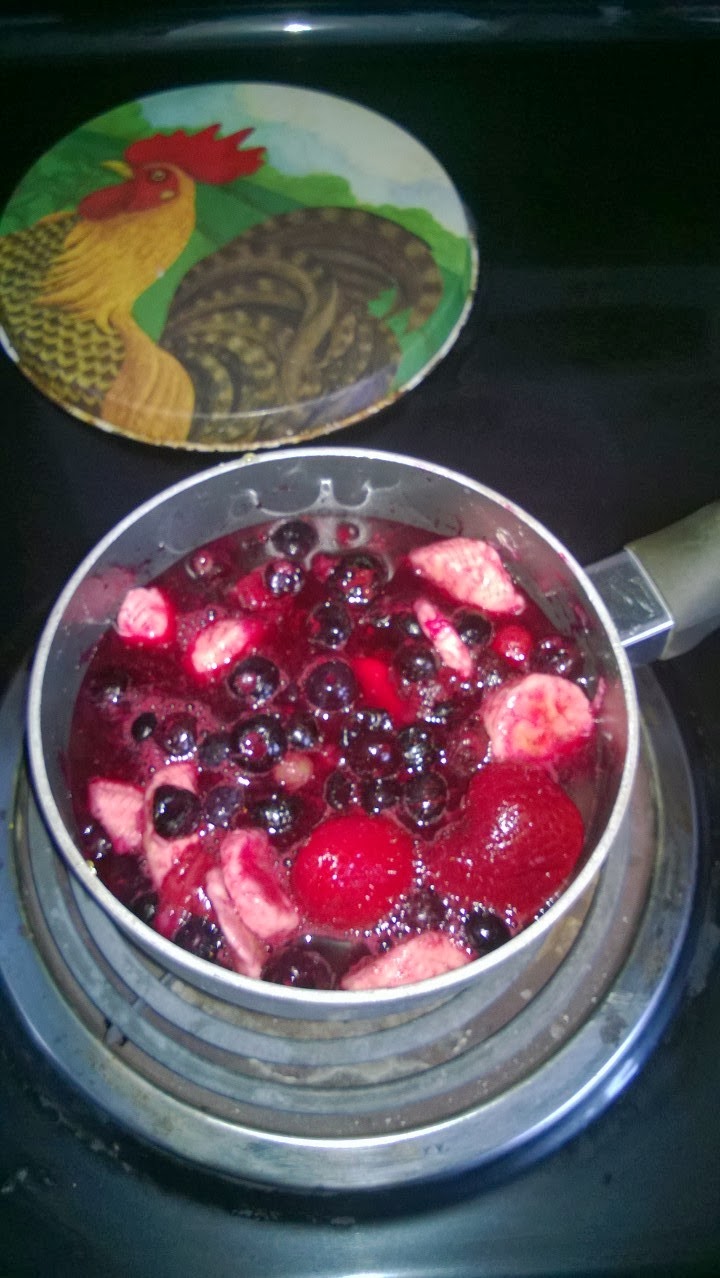 Let me just say that after about ten minutes of cooking these berries your entire kitchen is going to smell AMAZING!

Now there are two schools of thought on the next step, those who strain and those who do not strain.  Either way is fine but if you choose not to strain it will take the fruit leather CONSIDERABLY longer to set up and "leatherize" in the oven.  I choose to strain the liquid at this point and it finishes for me in less than half the normal time.

After simmering and straining, you place the mixture into a blender or food processor and blend it until it is smooth.  Then you spread it out as evenly as is humanly possible onto a cookie sheet lined with parchment paper.  You'll make your life much easier if you tape the parchment paper edges to the cookie sheet before hand, just a little tip.

After smoothing it out, you'll place the cookie sheet into an oven preheated to the lowest setting possible, in my case that would be 170 degrees.  Leave the oven door open a bit and wait, and wait.....and wait.  At 170 degrees and after straining it took my fruit leather approximately 4 hours to set up.  With a lower temperature and/or omitting the straining you'll be looking at six to eight hours, approximately.  You'll know the fruit leather is finished when it is no longer sticky and no longer wet but still soft and pliable.  If it's brittle and cracking you cooked it too long so it's not a bad thing to check on it every hour or so.

Once out of the oven you can invert take off the tape and invert it onto a clean cutting board.  At this point I trim up the parchment paper and cut the fruit leather into long, 1 inch wide strips.  Then I roll it and give it to the kiddos and the hubby.  If there is any left, and that's a big if, it goes in an airtight container in the fridge where it will keep for at least a week (that's the longest we've gone before eating it all). 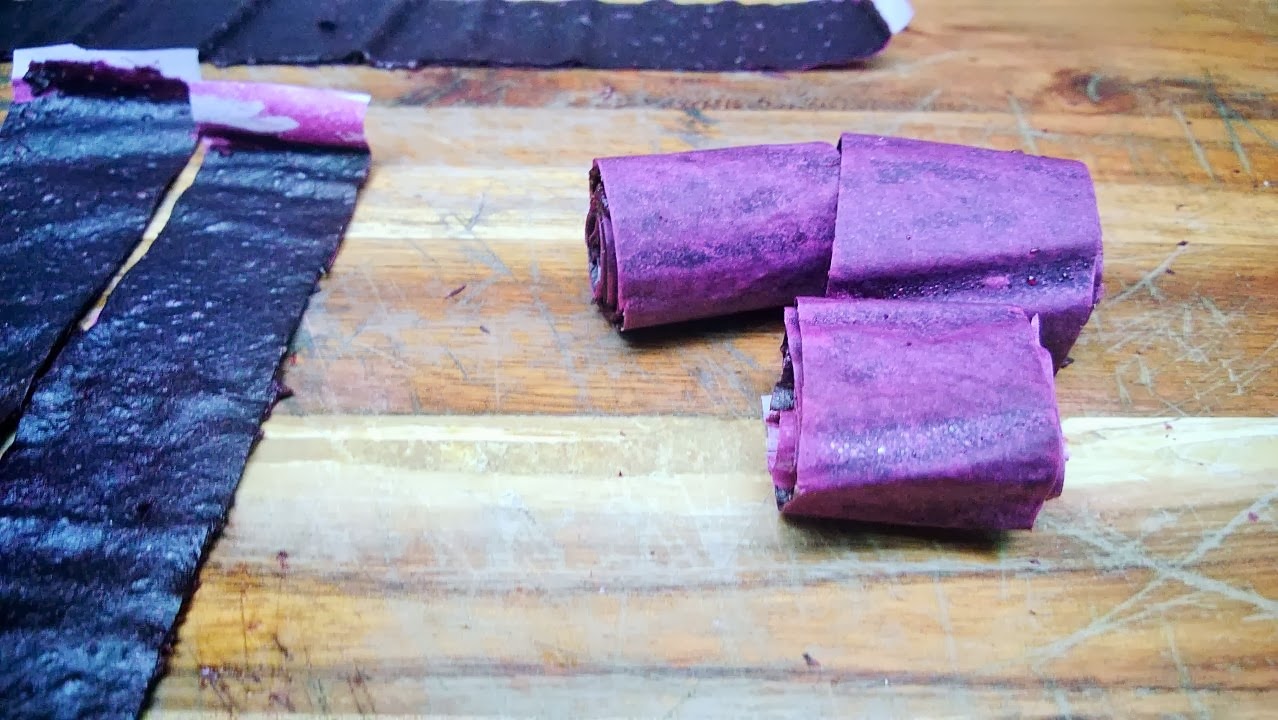 Now isn't that pretty?  And yummy too.