Posted by The Craftivist on Saturday, November 14, 2009 / Labels: swine flu
I had big plans for this blog this week.  I really did.  I had gotten a bunch of stuff together to do a whole little blogging mini series about toys.   But, you know what they say..."the best laid plans of mice and men oft go awry". 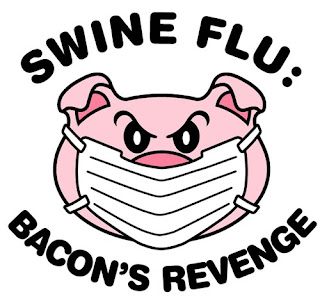 Yep, that's right.  The national "emergency" pandemic has officially hit home. Confirmed by a trip to the emergency room two nights ago for Youngest when his fever hit a boiling 104 degrees.

What irks me is that I broke down after hearing about a little girl in our area who nearly died from complications of swine flu and I got the kids vaccinated.  I stood in line in a crowded, currently out of business, department store for 1 hour and 45 minutes.  I literally wrestled my 3 year old into submission so that he could have vapor shot up his nose.   I then spent 20 minutes calming down the youngest after the "ordeal" was over.

We went through all that only to have Oldest come home from school looking more than a little pale 3 days later.   By that night she had a nasty cough, a nasty temperature, and an even nastier headache.

It has since been systematically moving through our family, taking each of us down one by one.  By that weekend, Middle was sick with the same thing.  Then the hubby.   Then Oldest started feeling badly again...it had turned into bronchitis.   Then Gran got it, although, thankfully, for her it was not so bad.   Then Youngest.   Now me.   Yep, as I sit here and type I'm rocking a 103.5 degree fever.  My head is pounding and I've spent most of the day in bed.   In between fitful bits of sleep I've been kicking myself for bothering with the vaccine in the first place since it clearly did us no good. Apparently it takes a good two weeks to even become effective.

At least some of our family is moving out of it's clutches.  Oldest finally started to feel better, but she still has the occasional coughing fit.   Middle is still pretty sick but he was up playing today and the fever has been gone for awhile.   The hubby is still not well but his fever is gone as well.  Youngest, as is usual form for him, is happy and bubbly regardless of his illness.  He's been sleeping alot though but at least his fever is under control.   I swear to you that kid would smile through almost anything (accept a shot).   Gran's all better.  She was better after about a day.   SO, I'm the last in the line.