Our Attempt at Kanzashi Flowers

Posted by The Craftivist on Monday, August 31, 2009 / Labels: kaznashi flowers, kids, outside 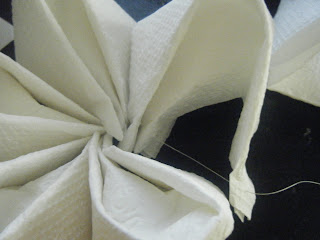 I got the idea to make kanzashi (that's Japanese for hairpin) using napkins from the filth wizardry blog. I folded two kanzashi flowers, one for each kid, because I knew that their attention wouldn't span across any more than that. Then I put several drops of food coloring into different plastic cups that I'd filled about 1/4 of the way up with water. 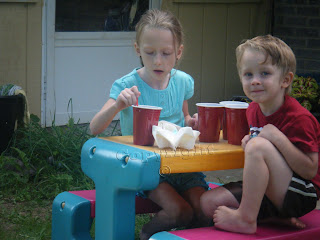 Then I sent the troops outside to go nuts. They decided that the kanzashi flowers looked more like lilypads than actual flowers. So they painted them in blues and greens in the spirit of frogs and water. 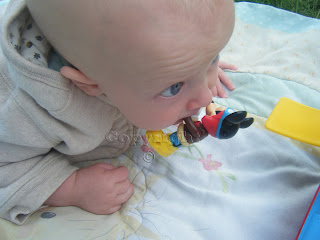 Meanwhile....the baby attacked a cartoon icon that dared to crash it's plane onto his crib comforter. (I took the toy away and replaced it with a more age appropriate teether after taking this picture). 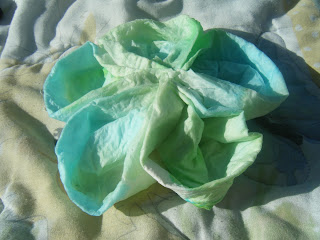 The resulting kanzashi "lilypads" turned out pretty nice. Traditionally they would have a bead or a button in the center and be fashioned in some way to be put in a woman's hair....BUT, my kids decided to abandon the idea of a beaded center. They (my son especially) would have no part in using them for their hair. Instead they decide to decorate their playhouse with them. 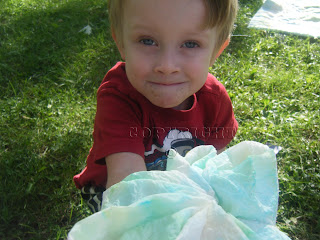 All in all, it was a good, inexpensive, easy way to entertain the kids for about an hour.