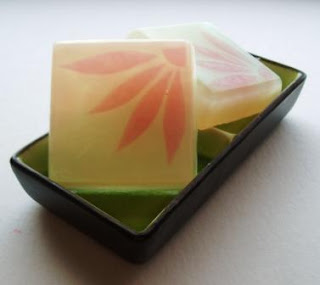 I was going through my bathroom cupboard this morning and realized we were very nearly out of soap. So, I spent most of this afternoon dragging out all of my soap making supplies and figuring out what to make, how much to make, and so on. I ultimately decided on 10 or so bars of lavender and rosemary which I will start on first thing in the morning.

I use a glycerine based soap because it eliminates the need for lye. Now you may be wondering what I have against lye. The truth of the matter is that I don't have some fundamental hatred of lye. However, I do have three young kids and two dogs who eat anything and everything (the dogs, not the kids) and so I'm not incredibly comfortable with having lye around since it is very caustic and can even be fatal if it's swallowed. When my kids are older and I have a larger workshop (a new workshop is in my navigational beakers), I just may broaden my horizons.

Until then, here's how I make my glycerine soap....

I use 2 cups glycerine soap base
A few lavender and rosemary leaves
2tsps of lavender oil
1 tsp of rosemary oil
A couple of drops of purple soap dye
I melt the soap base in a double boiler. Mix in the oil, the dye and the leaves and pour the mixture into the molds. Then just leave them sit for a few hours until they harden.

The picture I've included in this post is a lovely picture I found on flickr. You can see some of the other ways to dress up glycerin soap right here.