The Afghan from Hell. 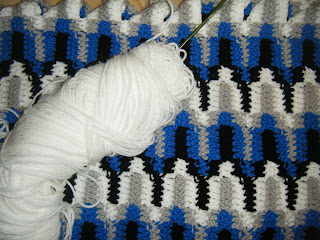 I've been crafting since childhood, but only crocheting for about 3 years (give or take). So it came as quite a surprise when my wonderful husband, Joe, came to me with an afghan request. He had an afghan he'd wanted made since he was a kid but no one had ever made it for him. It turns out no one had made it because they couldn't figure out HOW to make it. His Grandmother, who had been crocheting for around 60 years, couldn't figure out how to make it. His aunt also crocheting for over a decade, couldn't figure out how to make it. And now, here he was, standing in front of me with puppy dog eyes thrusting this pattern labeled *extra challenging* (Afghan Extravaganza 1995, Challenger pg. 124) onto my lap. I thought he must be joking, but I tried the pattern on a test run anyways, convinced that I wouldn't get past row 2. Well, I actually did get past row 2 and managed to figure out the pattern entirely. That was my undoing. My husband began searching the local craft stores for the yarn he wanted the very next day. He then decided that the blanket would be just too small if I followed the pattern exactly. So he made it almost twice as wide, which then meant I had to make it even longer, "so it would remain proportional" he argued. As a result, I've been working on this afghan for 2 1/2 months....and I just finished row 13 of 56. That's not including the border. This afghan hates me. But hear this! I will not be defeated! I will finish this afghan and I will do it in time for my hubby's birthday in Sept.! (Maybe).