Posted by The Craftivist on Friday, January 20, 2012 / Labels: craft, crafting, crochet, cute
My trips to Wal-mart usually are few and far between and typically consist of me heading straight for the produce section or the pharmacy aisles.  It's not that I don't like Wal-mart, I just don't really have much use for it.  I don't go grocery shopping all that often and when I do I usually go to our local Meijer.  So, the fact that I took a meandering walk through Wal-mart last night was pretty unusual for me but I'm happy I did because I found some really cute buttons and picked up some fairly inexpensive yarn at 2 a.m.   Really can't do that at too many other stores. At least something good came out of these bouts of insomnia. 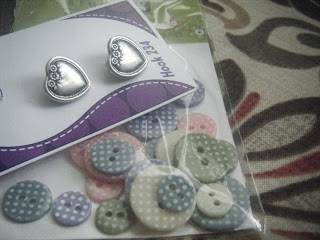 So while I was sitting awake looking at my new little baubles I decided to put them to good use and made a crocheted bracelet.  I used a simple pattern of just plain double crochet with a single crochet border, it was 3 in the a.m. by this point after all, intricate patterns were just not feasible accomplishments that early in the morning. 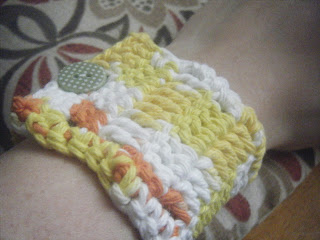 The button really makes the bracelet, I think.  I have several patterns now saved in my Ravelry favorites folder that include more intricate patterns and some knitted patterns.  It's kind of nice to spend a  little time making things that are just for fun every once in awhile.   Time well wasted.  :)