Posted by The Craftivist on Friday, January 15, 2010 / Labels: homesteading
My urban dwelling friends often ask me how I can take animals I've raised or help raise to market to be killed.  Their initial reaction is that it's inhumane to eat animals you've raised.   We usually end up in lengthy discussions where I end up explaining to them my viewpoint on the issue and they always seem to come out of it a little more world weary, a little more jaded, and with a strong resolve to buy from local farmers.
I entered into one such conversation today and it made me wonder how many people out there are under the impression that buying their meat from the grocery store is somehow better, more humane, than buying it from local farmers?   It seems to me that people see chicken, beef, pork, all packaged nicely and wrapped to go, in the grocery store and they don't think about where it comes from or how it got there.   Somehow, since they are so far removed from the process, it doesn't seem as concerning to them.

STOP NOW.  THIS POST CONTAINS GRAPHIC IMAGES WHICH MAY NOT BE SUITABLE FOR EVERYONE.  IF YOU DON'T WISH TO SEE THESE IMAGES THEN DO NOT READ ANY FURTHER.  OTHERWISE, READ ON MY FRIENDS.


My argument is generally that raising your own animals are at least buying from small farms where you can go and see how the animals lived and were raised is more humane and healthier than buying from the grocery store.

The reason for my argument is that most grocery stores get their meats from animals raised on factory farms.   Factory farms that operate like these: 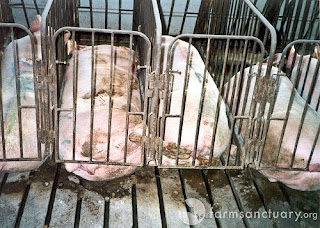 Where "breeding" stock pigs are kept their entire life time in pens so small that they can't even turn around. 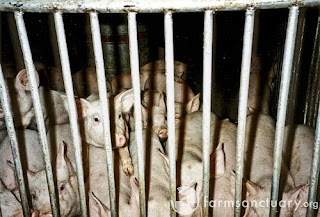 The living conditions in these farms are so crowded and unsanitary that illness spreads like wildfire.

The animals are loaded up on super antibiotics because if they weren't thousands of these animals would be lost to illnesses that are almost unheard of on small farms that run a clean operation.

They are also loaded with growth hormones so that they reach slaughtering weight faster and more "efficiently". 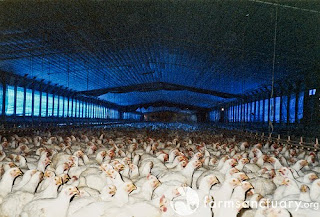 Another example of the extreme over crowding at factory farms. 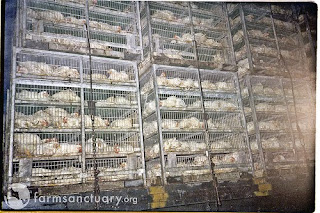 Many times chickens are crowded 10 or more to a cage with little room to move.

Mind you, chickens are not the brainless birds that they are sometimes portrayed to be.

They are engaging, intelligent (at least as intelligent as dogs and cats), friendly, creatures that when left to live a full life will form social connections and heirarchies in their groups, care for their young and bond to each other and to humans. 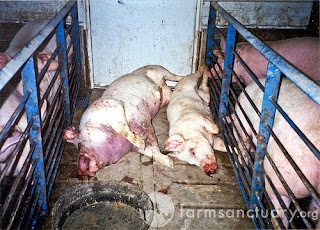 Pigs and cows are much the same way.

Pigs are super smart and complex creatures but in factory farms they are often abused and dead animals are often found lying around the floors and inside the holding pens. 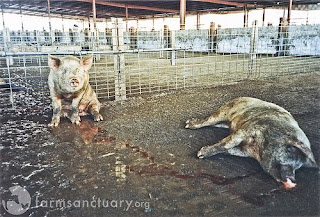 Pigs that are still alive but to sick to move are sometimes left behind to die or, possibly even worse, pushed, pulled and drug into the slaughter house to make it into our food supply. 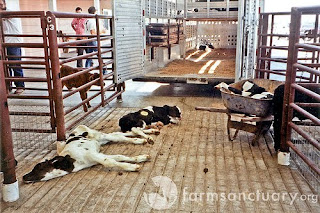 These are downed calves (some only hours old, others only a few days old) that are on their way to the slaughter house.

They are too weak and too sick to move.

This is what is packaged to Americans as "veal".

Now, compare this to what my animals go through.  Our chickens go through their lives in a roomy coupe with a nice sized grassy area for roaming and grazing.   They are fed a varied diet of grain, grasses and tasty little bugs that they pluck straight out of the ground.   They are kept in clean areas that are safe from predators.  They are handled with care and loved (yes genuinely loved) until the time comes for them to be processed.   We process our chickens ourselves in such a way as to minimize their stress and pain and to make the process go as quickly for them as possible.  They aren't strung up by their feet in mass production lines of flying feathers and frantic sqwuaking, loud machines and broken bones.

Our cows enjoy plenty of open pasture.  Good quality food and clean enclosures.  They recieve proper veterinary care, as do our chickens, and handled and talked to daily.   They are shown love and respect.  They get fresh air and we never, ever, rip mothers away from their babies until they are properly weaned at the right age.  Our orphaned calves aren't sent, feeble and sickly, to the slaughter house.  They are bottle fed and carefully attended to until they grow up strong and healthy.

When we take them to market we take them to a butcher that we personally know and that strictly adheres to certified humane standards.  Not all butchers do adhere to those standards, many just want to cut costs, and unfortunately it's difficult for outside groups to crack down on those that do not adhere to these standards.  Our butcher is not understaffed and his workers are treated fairly and well paid which actually does make a huge difference in how they treat the animals.

Unfortunately slaughterhouses like these, with skilled experienced and compassionate workers are becoming harder and harder to find because of the explosion of factory farms.  Factory farms tend to do their butchering on site and if they don't they hunt down the large slaughterhouses that are cheap and can turn out huge numbers of animals.

There are alot of reasons for the success of factory farms but at least one of those reasons is public ignorance to the problem.   You don't need to go vegetarian to help animals, you just need to avoid factory farms, support the small farmers and bring family farms back from the brink.    With the resurgence of family farms you'll see a resurgence of smaller operation slaughterhouses and smaller operations HELP to ensure more humane operations.