Posted by The Craftivist on Tuesday, January 19, 2010 / Labels: update 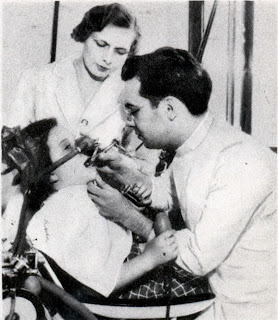 A couple of months ago I went into the dentist's office because of a pain in my upper right wisdom tooth.   Low and behold I had a decent sized cavity.   "Great" I thought, "at least I won't have to get it pulled"......

I made my way back into the dentists chair last week.   I was just a little nervous.  The last time I'd had my wisdom tooth pulled (upper left wisdom tooth) I was in the chair for over an hour.  45 minutes of that time was spent with the dentist literally yanking on my tooth.  The novacaine had worn off.  The dentist would clamp down on my tooth, pain would shoot through my mouth, I'd hear a crack, it would go numb for a second and then there would be blinding excruciating pain and then he would do it all over again.   I understand now why pulling teeth is such an effective form of torture.

I was expecting a similar experience this time around.   Except my current dentist is nothing like the dentist that did my last extraction.   I'm very fortunate to have found a dentist and dental office that make the patient's comfort their number 1 concern.  I've never seen a dental office that went so far above and beyond the call of duty when it comes to concern for their patients.   So last week when he started to pull the tooth and realized I wasn't completely numb he immediately stopped.  Bless his soul.  He gave me another shot.  I still wasn't numb.  He decided to send me to an oral surgeon.  I proceeded to panic.

I made the appointment with the oral surgeon anyways, like a big girl.   Today was the big day.  I was so nervous I thought I would surely pass out.   I tried to convince him that I didn't really need the tooth removed, the cavity could simply be filled.   His response was, "Nope, sorry, I can't recommend that".  Three shots later and my mouth is numb.  15 minutes later and he's back.   "You'll feel some pressure", he says.  That's the understatement of the century.  I thought my head was going to explode.

Not too much actual pain though for which I was eternally grateful.   The pressure was uncomfortable but this guy was aces at pulling teeth and the whole thing was over in less than 5 minutes.

I was prescribed some pain meds, antibiotics and loaded up on gauze pads.   I'm still bleeding a little and I'm a bit sore even as I type this almost 10 hours later but it's not as bad as it was.  At least it's behind me now.

Anyways, the anticipation of the event had me so worried that I wasn't blogging much.  Nor was I crafting much for that matter.   I've been working on a couple of old projects that need finished and hopefully will be able to post them soon.

So here's too happy teeth and happy crafting. 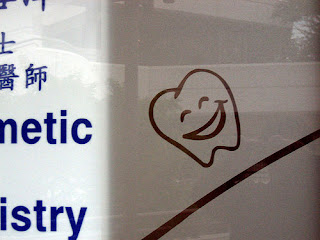