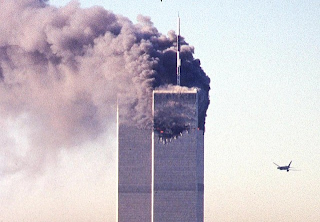 "I don't think of all the misery but of the beauty that still remains."
-Anne Frank

I can remember where I was on Sept. 11th 2001.  I was a freshman in college.  I was with a friend of mine in the student lounge, getting a sandwich before our morning classes.  There was a big screen tv in the lounge and a group had already gathered in front of it, although my friend and I had no idea why at the time.  We got our sandwiches and as I was paying for mine, he went over and stood in front of the tv and immediately came running back telling me a plane had hit the world trade center.   I remember thinking that it must of been a single engine plane, something small and feeling horrible for the pilot and whoever he may have had on board but figuring it had done only minimal damage to the towers themselves.

Then I walked over and saw the smoke and realized it was a full passenger jet that had hit the tower.  And we sat there, surrounded by people that we knew and people we didn't, and watched the live news broadcasts on abc as a second plane approached.  I can remember barely sputtering out "Is that another plane?" and a split second later it disappeared behind the first tower and a shot of flames, debris and smoke came out of the second tower.

I can remember sitting there watching in stunned disbelief when another friend came rushing in to announce that the Pentagon had been hit as well.  Then we went up to my dorm room and sat there watching the news reports on our little television with our door opened.  People from the hallway stopping in to watch with us.  At one point we probably had 20 people in our teeny tiny little room.  I remember seeing what I thought at first were suit coats flying out the windows and then realizing in complete horror that those were people, jumping out of a hopeless situation to certain death.

It's interesting now to see us as a country 10 years later.  Going to the airport is an entirely changed experience.  The site is still empty.  There's a national memorial being built in the middle of what used to be someone's cornfield.  We still stop and remember at memorial events.  But life has moved on.  There's still babies and weddings.  Still cookouts and parades.  We still go to work and we still ride on planes and trains.  People are resilient.  Today, we'll honor those who lost their lives on Sept. 11th and in the subsequent wars by celebrating the all American way of life.  We'll watch our football games, we'll eat a big Sunday dinner with family and friends, and tonight we'll say our prayers for those that are gone and for the family members that remain.