I'm Teaching Myself to Knit

Posted by The Craftivist on Friday, September 11, 2009
I decided about a month ago to teach myself how to knit. I figured it was only fitting that I should learn to both knit and crochet. So I went out and bought myself an "I Taught Myself Knitting" book which came complete with two sets of needles, a nifty little counting gadget, some stitch markers, a couple other little whatsits, and sweater patterns straight out of the 80's.

I proceeded diligently to scrap out about 4 rows before giving up entirely. I think that during that first attempt I was expecting something completely unrealistic. I was honestly expecting it to be pretty much the same as crochet except with two needles instead of one hook. It's not the same as crochet. Everything from holding the needles to controlling yarn tension seems different. That first attempt, the frustration of pioneering a brave new knitting world got the better of me.

But not this time. Oh no. This time I came prepared. This time I when I picked up those needles, I knew what I was getting myself into. This time I sat diligently down without the half-baked, lofty ideas. This time I've turned out three sets of at least two or three rows. It's going to be a lengthy process here I think. I still don't know how to make a purl stitch, I don't know how to fix mistakes like dropped stitches (which I think I'll learn next), and my stitches are completely uneven (but improving). But with the help of the internet, my trusty little guidebook, and my own two hands I think I'll make a knitter out of myself yet.

Here's a little bit of my handywork so far: 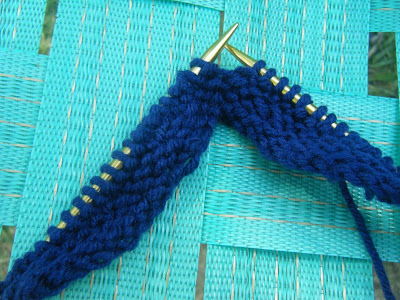