Posted by The Craftivist on Tuesday, January 5, 2010 / Labels: dogs, puppies 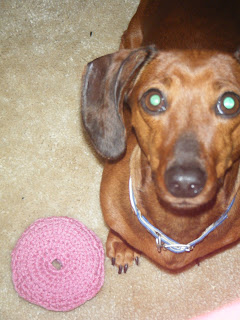 She's appeared on this blog before so I figure that it's about time to formally introduce her.

Cookie is a rescue mini dachshund.  She came from a puppy mill that was operating about 2 miles down the road from me.

The owner of the puppy mill had found out that he was about to be raided.

So he started to "unload" the evidence.

He began to dump dogs and puppies.

He dumped 4 at a neighbor's house and he dumped 5 in our yard.

With all the dogs that he dumped, animal control still found a whopping

60 (SIXTY!) dogs and puppies.  Turns out he couldn't unload all of them fast enough, he was still, thankfully, caught.

Of the 5 dumped at our house,

there was only 1 dachshund.  There were two chihuahuas, 1 lhasa apso, and 1 westie.

We fell in love with the dachshund immediately.  We already had a dachshund, Chandler (you can see his picture below), so we were familiar with the breed. It just seemed to fit.

Unfortunately, we couldn't keep all 5, and the two chi's were close to death as it was.

We knew they needed more care than we could provide. We turned the other 4 over to the SPCA, they were the ones who were spearheading the investigation.

From what I've heard, 1 of the chi's passed away before the end of the night.  The other had to be put down. But, the westie and the lhasa apso were able to be treated and found good homes.

We named our new family member, Cookie, because she was so sweet and we got her over to our vet immediately.

She was treated for dehydration, they estimated her age at about 5 years, and found she was pregnant.

She was, apparently, one of his "breeding stock".

We began her treatment for worms around what we guessed, based on ultrasound, was her 40th day of pregnancy, as recommended by our vet.

Fortunately, considering what she went through and where she came from, she was fairly healthy.

Now, I don't have anything wrong with dog breeders.  But there is a right way to breed dogs and a wrong way.  What he was doing was definately the WRONG way.

ANYWAYS, that was back in November.

As of right now we are getting very close to end of her pregnancy.

As you can sort of see here: 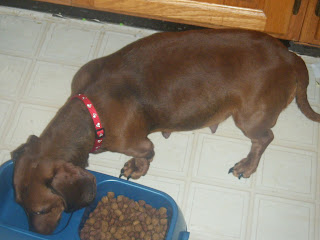 I've never been involved in the dog whelping process before.

Oh, I'm not new to the birthing process.

I've had three kids of my own, been around for the birth of calves, horses, goats etc.

But I've never been involved in the dog breeding realm of things.

I've got the vet's number posted on my fridge.

The number of a REPUTABLE and experienced dachshund breeder right next to the vet's number.

We've got the whelping box.

Bring it on mother nature! 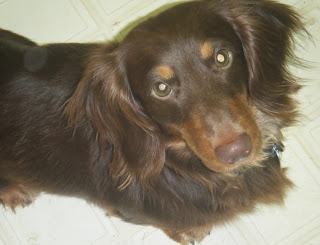 This would be Chandler.